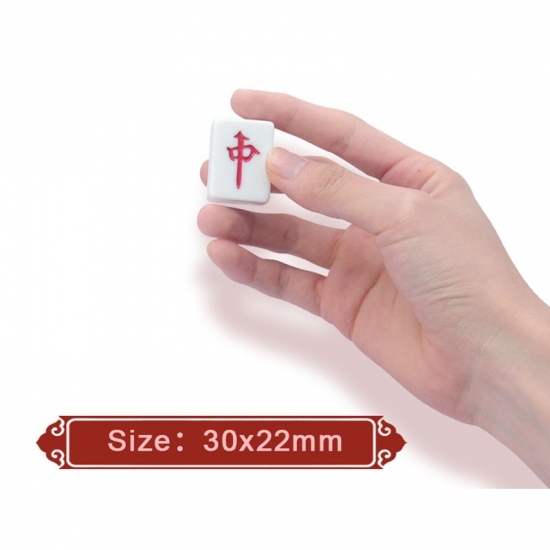 This traditional Chinese Mahjong is very interesting. The size is about 30X22mm, easy to drink and carry. It is made of melamine and has a smooth touch. The pack includes a total of 144 tiles of Chinese Mahjong, which contains 36 circle tiles, 36 bamboo tiles, 36 character tiles, 12 dragons (red, green and white), 16 winds (N, E, S, W), 8 flowers and seasons, 3 dice and 2 blank spare mahjongs. Different places have different rules of the game, you can choose the rules you want to play and learn.

The history of Mahjong can be traced back to three or four thousand years ago. At that time, Mahjong was a game played by the royal family and the nobles. In the long-term historical evolution process, Mahjong gradually spread from the court to the people, and it was basically finalized in the middle of the Qing Dynasty.

Mahjong not only has unique game characteristics, but also is a game that integrates intelligence, fun and game. component.

It is precisely because of the diversity of Mahjong that it is very popular in urban and rural areas in China, involving all classes and fields, and entering thousands of households. It has also become the most large-scale and influential intellectual sports activity in China.

Because of these characteristics, Mahjong is not only popular in Asia, but also popular in Europe and America. In the early 1920s, there were still Arabic numerals and letters in the mahjong tiles. There are also many magazines and national mahjong competitions abroad that describe and study mahjong playing methods in detail. In Europe and the United States, many people regard mahjong as an antique of oriental taste, and put it into a delicately carved box for collection.

With the development of modern science and technology and the progress of society, it is now possible to use electronic devices to play mahjong with friends and even strangers.

•Many colors are available

•smooth tactile impression and the Size is right