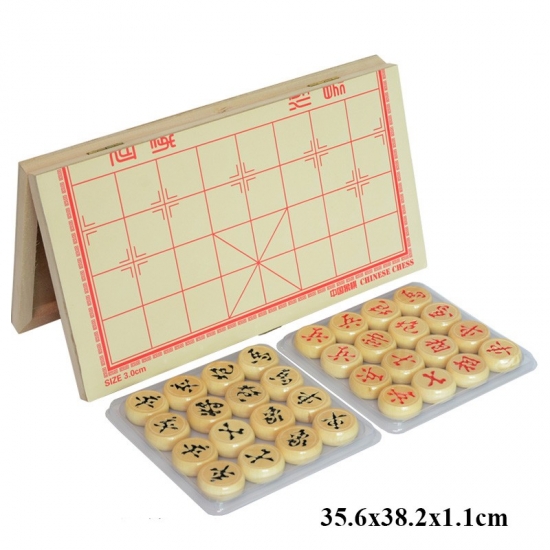 Chinese chess is a type of chess that originated in China. It is a kind of confrontational game between two players. It has a long history in China. Because of its simple equipment and strong interest, it has become a very popular chess activity. This Chinese chess with magnets can keep your chess pieces from falling. The surface of the chessboard is waterproof and can be washed directly.suitable for your family game.

Chinese chess adopts a square grid-shaped chessboard with a total of hirty-two chess pieces, sixteen black and red, placed and moved at the intersections of the squares. The two sides play chess alternately, and the first to defeat the opponent’s “general” wins. Chess is a two-player game. In the chess battle, the thinking ability can be improved from the changes of complex relations between attack and defense, false and real, whole and part, etc.

Chinese chess has many rules:

First, before the game, the pieces of both sides must be placed on the chessboard in a fixed position.

Second, in the game, the player who chooses the red pawn moves first, and the two players take turns taking one step.

Fourth, each side makes a move, which is called a round.

Fifth, when playing chess, if there is a chess piece where our chess piece can go, we can capture the opponent’s chess piece to occupy that position.

Finally, when one side attacks the opponent’s “general” or “handsome”, it is expected that when it is eaten in the next step, the opponent must use its own method to resolve it.

When you don’t need to use it, the chessboard can save all the pieces well and prevent the pieces from being lost.