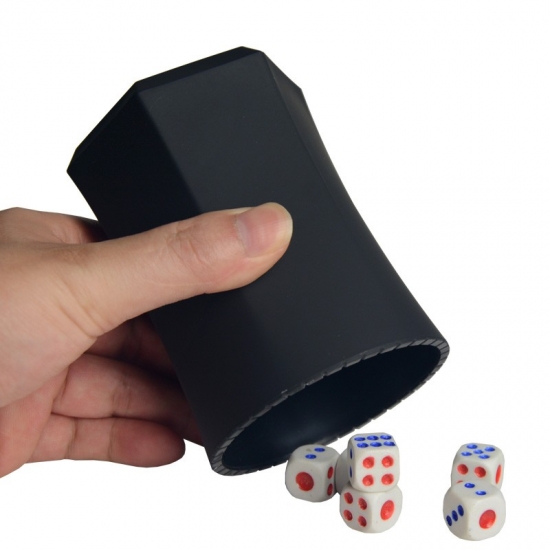 This is an entertainment dice cup set, thickened dice cup, diamond design. The plastic material is waterproof, washable, safe and durable. It can be used for friends gathering, ktv, bar games to add fun. A dice cup gives 6 dice, and you can customize your exclusive LOGO.

The curved design of the dice cup is more in line with the gripping habits, and it is more difficult to slip off. Creative sawtooth design cup mouth, increase friction. Hexagonal straight edge base, easier to place in reverse.

Dice are traditional Chinese folk gadgets. They were used as small props in table games during the Warring States Period. The most common dice are the six-sided dice of a cube, each of which has one to six holes, and the sum of the two opposite sides is seven.

The more common way to play dice is to compare points. Its gameplay is that each person takes a dice cup, puts five dice in it, and can see their own points after rolling. If it is a straight from one to five or two to six, it will be re-rolled. In this way of playing, one can represent one, or it can represent any other point. For example, if the number you roll is one, one, three, five, and six, then you can call two ones or three threes, three fives, and three sixes in your own dice game, but this game At least two people are needed, then you should just guess what your opponent has shaken.

The rule of shouting is that you need one more point or one more number than your upper player. For example, if you shout three fives, then your next player can only shout three six or four arbitrary numbers.